In the United States, the prevalence of type 2 diabetes is 32.6 million or one in ten Americans. These numbers are expected to continue to rise. 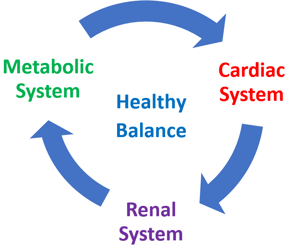 As a result, diabetes, kidney disease and cardiovascular disease are three conditions that often develop simultaneously. Compared to patients without diabetes, those with diabetes are two to four times more likely to experience cardiovascular events, such as a heart attack or stroke, and more likely to have worse outcomes after these events. About half of all diabetes related fatalities can be attributed to cardiovascular disease. Diabetic kidney disease affects almost 40% of patients with diabetes and is the leading cause of end stage renal disease.

Uncontrolled type 2 diabetes contributes to worsening cardiovascular disease; leading to heart attacks, strokes and chronic kidney disease. Multiple studies have shown that these complications will occur within the first five years of developing diabetes. Therefore, the better a diabetic’s blood sugars are controlled within this five year span, the less likely he or she will develop a lifelong debilitating disease.

Good diabetic control is important to prevent further complications. In addition, some medications have proved useful. Multiple studies have clearly established the benefit of several specific medications. ACEI1 and ARBs2 are the most commonly used medications that have cardio-renal protective properties. These are commonly used in diabetics to help prevent cardiac and renal complications. Their benefits have been known for over 30 years. Through more recent research, it has been found that other groups such as SGLT2 inhibitors3, GLP-1 receptor agonists4 and selective nonsteroidal MR antagonists5 have also been shown to have cardiac and kidney protective benefits that surpass the benefits of ACEI/ARB alone. This highlights the importance of research to continually investigate new medications to address the complex complications of diabetes.

As a clinical research site for over 20 years, Chase Medical Research has been involved with these new developments that have lead to FDA approvals. We are currently participating with a number of pharmaceutical companies searching for even more innovative compounds that will lead to longer and healthier lives for all diabetics.